Blog The Cathedral of Seville

The Cathedral of Seville

If there is something that stands out in a exponential way in Spain, that has to be the Cathedral of Seville. By chance you know everything related to this interesting construction? No? So don't worry, since now you know which are the most salient aspects of this monument of Spain.

The full name (so) of this Cathedral is Santa Maria Sevilla headquarters. It is a Gothic cathedral which is declared as heritage of humanity by Unesco. It is beautiful, fascinating and curious by lot, therefore requires that sufficient attention is paid to you. This can be done right here! Find out that mysteries this Cathedral behind its walls.

History of the Cathedral of Seville

The Cathedral of Santa Maria of the headquarters of Seville was founded in 1172 as a mosque of Muslim administration. In 1248, the Christians conquered the places where it is now the city of Seville and consecrated the aforementioned mosque. This resulted in that now would be a cathedral, with apparent changes such as a new Royal Chapel.

The Gothic tone of the Cathedral it was imposed in the year 1401, as part of a remodeling. The mosque was in decline and had been very poorly preserved, it was therefore necessary to restore it virtually. Its construction began in the year 1434 and ended its first phase in 1506. Four years later, the collapse of one of the pillars of the Sevillian Chapel brought with it a new renovation.

From 1511 until 1823, the changes were constant and the improvements in the chapel were outstanding and impressive. Its domes, buildings and other structures were improved and changed always for the better. That made this Cathedral was really unique!

Already for 1928, major structural work already had been completed and the Cathedral stood stunningly. Many were those who worked in this architecture over the years, all to create a unique building. And they did it!

Materials and near the Cathedral of Seville

With regard to the materials of the Cathedral of Seville, is that the stone is more predominant. This is because he always tried to preserve the main Gothic style of the Cathedral. In this style, which is more dominated, as it should be assumed, is the stone. Despite this, there are other materials such as limestone, rocks of steppe, Morón de la frontera and others.

In regards to the surroundings of the Cathedral of Seville, should mention the famous Giralda. This is not more than a Tower located next to the Cathedral and that it works as a Bell Tower. The word comes from the latin 'spin' and refers to the weather vane located at the top of the tower.

There is also the so-called Patio de los Naranjos, an area that has been used for many kinds of activities. It has become a place of celebration, to an area where you can watch and bury the dead. All changing over the years!

If we talk about the interior of the Cathedral in Seville, should appoint the Iglesia del Sagrario. This located to the West of the Patio de los Naranjos and its architectural beauty is really palpable. It has four doors, which two of them go to the above-mentioned courtyard. One of those doors leads to the interior of the Cathedral and the other leads to the outside.

Most relevant aspects of the Cathedral of Seville 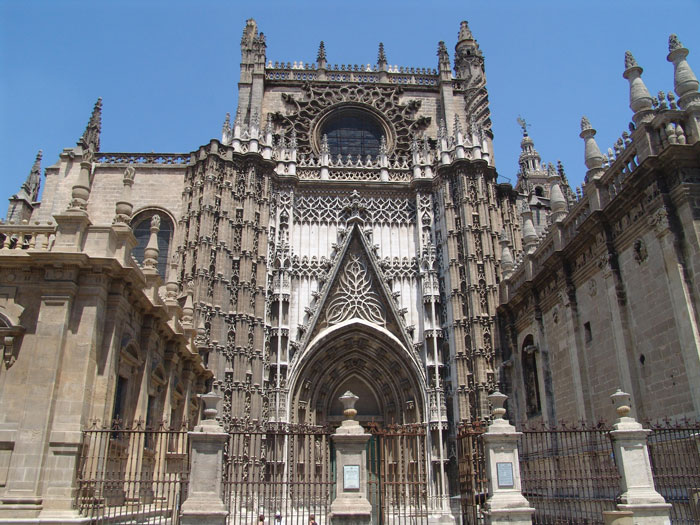 Thanks to his long life and his ceaseless constructions, this structure has a wide variety of salient aspects. Some have been mentioned, but is to mention a few more that may be of interest. These include the following from the Seville Cathedral:

These aspects and everything else said, makes this place in Seville a monument that deserves to be visited. What are you waiting for go further and note that, indeed, this Cathedral is a magical place?

0 comments in The Cathedral of Seville