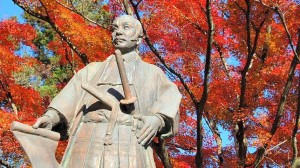 400 years ago, reached Seville from Japan, the Keicho embassy, ??with the aim of seeking trade relations with New Spain (Mexico). Here they remained for some time settling in different parts of the province of Seville. On the occasion of the celebration of the 4th anniversary of the arrival of the Japanese in Sevilla, has been created a tourist route through the steps of the Embassy Keicho in Seville.

Route of the Japanese in Sevilla

The tour is called "In the Footsteps of the Embassy Keicho in Seville" and has its starting point in Sevilla to advance Coria del Río, where we visit the monument to Hasekura (samurai who was in charge of the embassy). The journey continues towards to the Monastery of Loreto, in Espartinas, where the ambassador and his entourage took up residence for a year. The next and last visit of the route is the Hacienda San Luis de Mejina, Espartinas, one of the places where Hasekura was living. In this estate there will be a recreation of a meal period as was done 400 years ago: utensils, dishes, recipes and even the staff will dress according to the time.