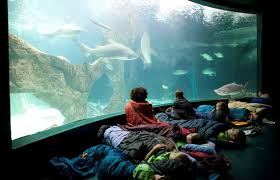 A group of children and adults sleep for the first time at the Aquarium accompanying sharks.

For the first time since the Aquarium opened Sevilla, animals that inhabit the Oceanarium, accompanied fallen asleep. Last Friday was released in the aquarium 'Shark Night', one of the most iconic activities Aquarium Sevilla.

'Night with sharks' is an activity that offers the public the opportunity to learn about as impressive fish such as sharks, by proximity and pre-night activity. A unique opportunity to observe all tenants Aquarium differently, because at night the Aquarium is transformed and animals behave differently.

The event, attended by children and adults, was conducted by several members of the education team of Aquarius. It started with the reception of the group at 20:00, and the introduction of activity. Once all group members presented a special guided tour to the Aquarium was performed. After dinner began nightlife "The mystery of sharks", an educational game based on conduct various tests. Once finished, made a surprise activity and later, group members were prepared to go to sleep, putting on pajamas and placing the bags in front of the main tank Aquarium, Oceanarium, where two copies of bull sharks live, among other representative species of Aquarius. Around one o'clock the lights, and from that moment everyone was asleep watching swimming reconciling all the species in this tank went out.